FORT MILL S.C. (CN2 NEWS) – A small gesture can have big meaning. That’s the message one local Pastor is trying to share with her congregation, but she hopes the message of extending hospitality goes well beyond their church doors.

Recently those doors opened to another congregation, a Jewish community looking for a new Temple home. To make them feel at home, she came up with an idea, she calls a small gesture, with big meaning. CN2’s Laurabree Monday takes us to one unique event. 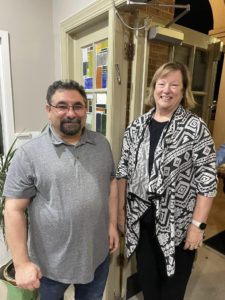 Russ Cobe, the lay leader for Temple Solel explains, “a mezuzah is what you put on the outside door entrance to a house, some houses put them on every door. It’s just a symbol of our connection to God and on the inside is the Shema prayer which is one of the most important prayers in Judaism.”

A mezuzah outside a Jewish home, is not that unusual a sight. A mezuzah on the door of a church – that’s also home to a synagogue, much more unusual. 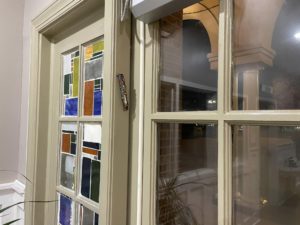 She explains, “Hospitality, a big thing with us, radical hospitality and being welcoming of people who aren’t welcome in other Christian congregations. So, then hospitality extends beyond that, what are ways we can extend that to others. We know about the mezuzah, but I didn’t know if it was appropriate in a worship space or just for homes. So, I asked the question. Our leadership was 100 percent in favor, their only question was what’s a mezuzah? Once we got that straightened out, of course, anything we can do to be welcoming.”

Cobe goes on to share, “It’s very overwhelming and exciting, the current environment is not nice towards Jews and people of other faiths and directions and feelings. So, to have someone say would it be welcoming, please do that, please put a mezuzah on our door. Is just amazing, astonishing.”

Sizoo telling her congregation at the Sunday service following the installation that she doesn’t know what it’s like to live as a Jew in 21st century America but their brothers and sisters in that congregation do. Sharing that for Grace Presbyterian “it was a small thing, a no brainer, of course we would do that, it’s in our bible too, but for Temple Solel it was a very big deal.”

She goes on to share, “That’s such an important part of our life together as Americans, to have a broad spectrum of religious traditions and that we’re all in this together. By virtue of birth, nationality or tradition or choice we are in different faith traditions, but all of us are moving towards the same goals of an active spiritual life and becoming closer to the God we worship.”

A message filled with warmth, both congregations hope, goes well beyond their walls. Building love through kindness, one nail or gesture at a time.

Grace Presbyterian’s Pastor explains it’s not just about being open to other religions. They want to be a welcoming place to those in the LGBTQ community and they try to work on issues of racism. She says the more they do as a community the more she hopes those same welcoming behaviors will be done at home.

Temple Solel leaders say they have not heard of another Church placing a mezuzah on the door as a welcome sign for a Jewish congregation, it may have been done elsewhere, but it’s certainly not common.