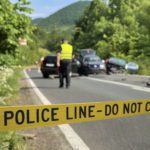 Officers say the driver, Paul Culp, 34, of Lancaster was driving the 1995 Honda Motorcycle when it collided into a 2001 Toyota Pick-Up that was attempting to turn left into a private drive.

The driver of the Toyota Pick-Up was not injured.

This is an ongoing investigation.