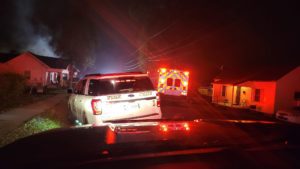 Fire crews say they were called to a home on McClure Street around 2:30 AM for a structure fire.

Officials say it was a fully involved structure fire with 2 entrapments.

Officials say both Caldwell and Mobley were found deceased in the home.

Both victims are related, according to coroner, Terry Tinker.

Richburg Fire and Rescue Chief T Melton reminded residents in a post on social media to make sure to test smoke detectors, adding detectors over 10 years old should be replace.

SLED is investigating the cause of the fire, coroner Tinker says.

“Our prayers are with the family and friends that are dealing with this tragic loss of life”,  says Richburg Fire officials.