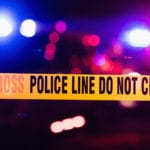 UPDATE: An arrest has been made in deadly shooting at Lancaster Motor Speedway.

Bryan Terrell Mitchell, age 37, of Rock Hill, has been arrested and charged with Murder and Possession of a Firearm during the Commission of a Violent Crime related to the shooting death of Rodney Tobias Cunningham last night at the Lancaster Motor Speedway.  Mitchell was developed as a suspect shortly after deputies and investigators arrived at the speedway last night.  A sheriff’s office K-9 unit ran a track but was unable to locate Mitchell.  At about 3:00 a. m. Mitchell entered the Scotchman Store at Charlotte Highway and Shiloh Unity Road.  Deputies were called and responded but Mitchell had left the store.  About 5:00 a. m. Mitchell was spotted along Charlotte Highway just north of the new bridge construction and fled into the woods.

Mitchell’s motive for the shooting is unknown.  It is also unknown whether Mitchell and the victim were acquainted.  The investigation will continue.

LANCASTER, S.C. (CN2 NEWS) – One man was shot and later died last night, August 27 during the last race of the night at the Lancaster Motor Speedway, around 11 p.m.

Authorities said several officers who were working the event found a 53 year old man just inside the front gate suffering from gunshot wounds. The victim was transported and died at the hospital.

The Sheriff’s Office is saying this is an an ongoing investigation.

Anyone with information about this or any other case should call the Lancaster County Sheriff’s Office at 803-283-3388 or contact Midlands Crimestoppers in one of the following ways:  dial 888-CRIME-SC (888-274-6372), log onto www.midlandscrimestoppers.com and click on the “Submit a Tip” tab, or download the P3 Tips App for Apple or Android devices.

PRESS RELEASE from the Lancaster County Sheriff’s Department:
The Lancaster County Sheriff’s Office is investigating a shooting death that occurred at Lancaster Motor Speedway Saturday night, August 27, 2022.  The incident occurred during the last race of the night and was dispatched out at 10:53 p. m.  Deputies were working extra duty at the track during the event and immediately responded to the area just inside the front gate near the ticket office where they found the 53-year-old male victim with apparent gunshot wounds.  They rendered aid until personnel of Lancaster County Fire Rescue and Lancaster County Emergency Medical Services arrived and took over care of the victim.  The victim was transported to the Medical University of South Carolina-Lancaster Medical Center where he was pronounced deceased.  An autopsy will be scheduled by the Lancaster County Coroner who will identify the victim at a later time.

A large crowd was on hand for the night’s races.  Patrol deputies arrived quickly, secured the scene, and identified and began interviewing witnesses.  Investigators were called and crime scene investigators also arrived to begin processing the scene and collecting evidence.  No one else was injured during the incident.  Witnesses provided information concerning the shooter, and all leads are being pursued.  No arrest has been made.

“Lots of folks were at the track last night, and a good number of people likely saw some or all of the events leading up to and including the shooting,” said Sheriff Barry Faile.  “We have identified some of them but encourage others who we have not talked with to call the sheriff’s office and tell us what you know.  We hope to positively identify the shooter and take him into custody soon.”

(All defendants are presumed innocent unless proven guilty in court.)

Anyone with information about this or any other case should call the Lancaster County Sheriff’s Office at 803-283-3388 or contact Midlands Crimestoppers in one of the following ways:  dial 888-CRIME-SC (888-274-6372), log onto www.midlandscrimestoppers.com and click on the “Submit a Tip” tab, or download the P3 Tips App for Apple or Android devices.