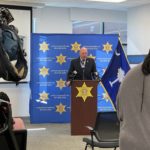 Sheriff Tolson telling us the suspect Tyshawn Mailak Benjamin, 25, died at the hospital after ramming the car, that he stole, into the officer’s car. Tolson says that the suspect’s stolen vehicle became a weapon and the officer was using his gun as self-defense.

The investigation is being led by SLED.