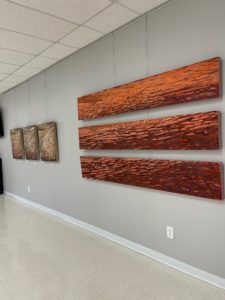 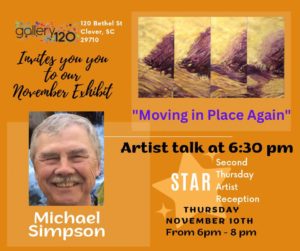 CLOVER, S.C. (CN2 NEWS) -Gallery 120 in downtown Clover showcases artists locally and from around the country.

Its a place for community members to enjoy and appreciate artwork.

On Thursday, November 10th, Gallery 120 will be showcasing artwork from artist, Michael Simpson.

Simpson’s art of paintings of white-water rivers will bring the gallery to life with a reception from 6 PM until 8 PM.

Upon receiving a B.A. from Western Illinois University, an M.F.A from Illinois State University and serving 3 years in the Air Force, Simpson began teaching at his hometown Community College. He moved on to share his knowledge of the art world with students at Auburn University, Eastern Michigan University, and Winthrop University followed by retiring from the University of North Carolina at Charlotte in 2015.
Simpson’s inspiration came from a childhood in which he experienced the beautiful nature that the flat farmlands and mountains that Illinois offered to an adventurous young child wanting to explore. His work utilizes photography along with videography of mountain waterfalls and rivers to catch the surge and broil in detail. Returning to his studio, Simpson would translate the flow of the videos into beautiful paintings focused on singular movements of the water flow.
Simpson over the years has had the opportunity to show in multiple exhibits throughout the country including but not limited to: Arts Council of York County in Rock Hill, SC, Getty’s Art Center | Rock Hill, SC, Arts Connections | Miami, Fl, Duke Center for Performing Arts | Raleigh, NC and so much more.

Gallery 120 is located in the Clover Community Center at 120 Bethel Street, Clover.

You can view Simpson;s virtual exhibit in Gallery 120 at www.clovergallery120.org

CN2 Today Pets of the Week – Meet Lagetha and Kinley