CN2 Athlete of the Week – Soon to be Gamecock Elijah Caldwell

ROCK HILL, S.C. (CN2 NEWS) – Here are three stories from your back yard that are worth a second look.

The Sheriff’s Office says the chase ultimately ended in 3 gun shots and the suspect dying after a senior deputy was forced to defend himself.

Late this past Thursday afternoon, cheers were heard when Judy Pate, 79,  was found alive and responsive in an area volunteers and first responders have search several times on Cemetery Road. 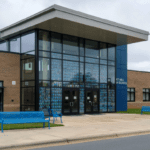 FMPD detectives say they have identified a second suspect in this case. The second person is described as sixteen-year-old male who is a Fort Mill High School student and resides in Fort Mill. Second Fort Mill Student Charged After Threats